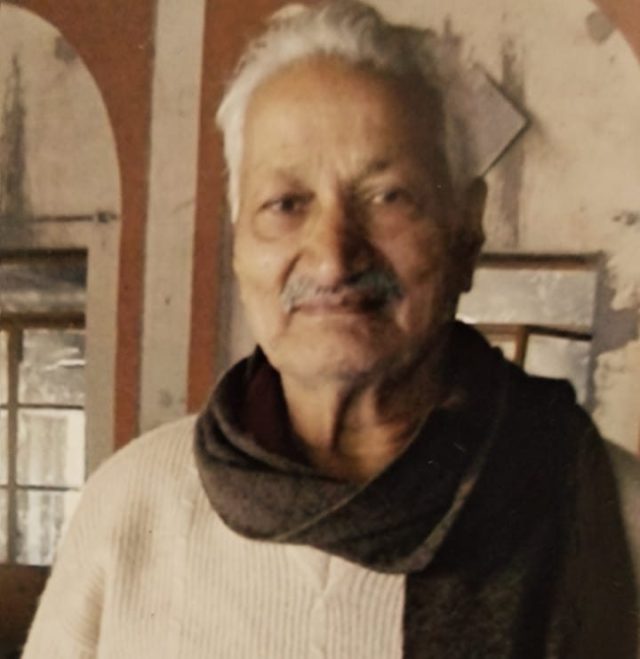 Aruja says “We don’t even know which of the results is preferable for us—conquering them or being conquered by them. Even after killing them (the respected ones) we’ll not want to live. Yet they have taken the side of Dhritaraashtra, and now stand facing us on the battlefield.

I am confused about my Dharma (duty), and am captured by anxiety and faintheartedness. I am your disciple and am surrendering to you. Please instruct me decisively what is best for me.

I can not see any means of driving away this anguish that is drying up my (indirya) senses. Even if I win a prosperous and unrivalled kingdom on the earth, or attain power & sovereignty like the celestial Gods, I will not be able to dispel and overcome this grief.

Sanjay said: Having thus spoken, Gudakesh (the conqueror of sleep), that chastiser of enemies, addressed Hrishikesh (master of mind and senses) “Govind (the giver of pleasure to the senses)! I shall not fight,” and became silent.

O Bhaarat (Dhritarashtra), thereafter, in the midst of both the armies, Hrishikesh (Shree Krishna) smilingly spoke the following words to the grief-stricken Arjuna.

Arjuna, now having spoken his mind is concluding. In fact he is finding himself in utter confusion for after listening to his list of reasons for not taking up this war against kauravas; His cousin and wise charioteer, Krishna had called him Kleeva (eunuch) thereby challenging his bravery and then simply asked him to pick up his bow and armours to fight. Such plain rejection of all of Arjuna’s sensical (at least in his own view) reasons was completely unexpected. It was a jolt to his thinking and he could see some value in Krishna’s directive of fighting the war but his deeper, conditioned response was still overpowering thus he became totally confused.

This complex state of confusion is extremely precious because because amid the inner fight of reasons and counter reasons which only creates more confusion making a person come to a third response – freeze. Fight and flight was engaging to the karmendriyas but ‘freeze’ makes one introvert for it concerns one’s inner energies, gyaanendriyas (sense or cognitive organs) and antah-karanas (inner instruments of action). Only because this confusion happened Gita became possible!

The possibility of Gita, coming from a Guru that has power of clearing all the confusions happens only when a disciple is confused but along with this confused state another element is compulsory – The surrender. See what Arjuna is saying. He says “I am confused about my Dharma (duty), and am captured by anxiety and faintheartedness. I am your disciple and am surrendering to you. Please instruct me decisively what is best for me.” Further explaining his confusion, inner deadlock and helplessness he says “I can not see any means of driving away this anguish that is drying up my (indirya) senses. Even if I win a prosperous and unrivalled kingdom on the earth, or attain power & sovereignty like the celestial Gods, I will not be able to dispel and overcome this grief.” 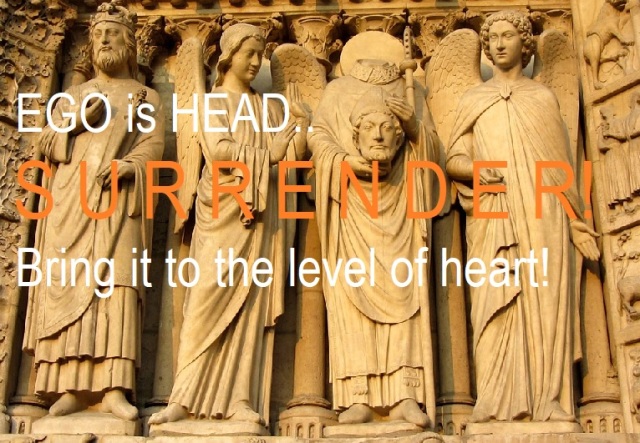 This is a miracle moment in Kurukshetra! How so lovely! A disciple and his Guru are born in the battlefield! But two people knowing each other for more than eight decades but how come such surrender did not happen in 8o years! Yes, At the time of Mahaabhaarata Krishna and Arjuna both were about 89 years old. Whole of his life Arjuna knew that Krishna is not an ordinary man. He very well knew his baalaleelaa and his divinely heroic deeds wherein he removes countless number of wicked demons and the great powerful king of Mathura, Kansa. Arjuna took Krishna all his life only as a wise friend, loving cousin and an able advisor who had command in many kalaas including the religious principles (dharma). Dharma is a complicated and confusing subject because opposed to the spiritual understanding where ‘world is just an illusion – Maya’, it is rooted in the understanding that ‘this world is real’ and therefore while dealing with and living in this real world innumerable rules are to be followed. It happens so that many times for ordinary mind some of the rules seem contradicting each other and therefore someone wise need to be consulted to interpret dharma (duty of human being).

It is said there are twelve great knowers of religious principles— the Aja or Brahma, Naarad, Lord Shiva, the Sanatkumaras, Kapil Muni, Svayambhuva Manu, Great devotee (Bhakta) Prahlaad, King Janak, Grandfather (Pitaamaha) Bheeshma, Raja Bali, Shukadev and Veda Vyaasa. None of them can be consulted by you in today’s time therefore if someone chooses to live a religious life he/she will have to look out for someone who knows the essence of scriptures. If we go by vedic dictum then it is said in Mundakopanishad “To know the Absolute Truth (Brahm/Shiv Tattva/Parmaatmaa), approach a Guru who is both a knower of the scriptures and is situated on the platform of God-realization”. For a modern man finding such teachers is almost an impossibility nevertheless one must continue his search for such a teacher keeping Lord’s declaration in mind ‘yadaa yadaa hi dharmasya glaanirbhavati bhaarata, abhyutthaanama-adharmasya tadaatmaanam srijaamyaham’ If you are willing to be guided by Dharma Lord will appear in your life!

Arjuna declares “शिष्यस्तेऽहं शाधि मां त्वां प्रपन्नम्, I am your disciple and I surrender to you for your guidance.” This moment is magical. This is turning point in Arjuna’s life. In fact from hereon Krishna the friend cum advisor has become Guru. You may have questions in mind how come just in the confusion of few minutes Arjuna could accept Krishna as Guru so decisively. Well, you don’t see the urgency of it in your life that is your problem. You feel a ‘tomorrow’ is always assured. You don’t see the futility of winning the battles and war you are fighting. You feel this ‘sadness’ and ‘anxiety’ will go away once you will ‘win’ the ‘set targets’. Take Arjuna as an example of an extremely successful person as far as shooting down the target in material life is concerned. Deep slumber, wrong direction of efforts and lack of urgency apart, I must say you are also not as capable as Arjuna, ‘Gudaakesha – the one who has won over his sleep’. While this may be true that Arjuna won over his sleep but metaphorically this indicates a state where a seeker is putting every effort to utilize every moment of his/her life so much so that sleep has vanished from his eyes. Arjuna has definitely accepted Krishna in his urgency. You will see his ensuing questions, his further doubts and hiccups in accepting his Master’s advice only prove this point in the course of Gita.

Arjuna is ready to listen to his newly found Guru, Krishna. Everyone has to find one. Just to demonstrate the need for accepting a Guru to gain knowledge, Lord Krishna himself took this step. In his early life, he went to the Ashram of Sandipani Muni (currently in Ujjain) to learn sixty-four sciences from him. Whom are you waiting for? Are you waiting for a Mahabharata? In all probability there’s no possibility of a Mahabharata happening in your life wherein you would be required to kill your relatives, friends, brothers, uncles and teachers. So wake up become aware of your own battles and confusions then only you would earnestly yearn for the ultimate wisdom. Feel the urgency of finding the nectar of immortality before death comes. Death is not a thing of tomorrow. It has already swallowed up many many you loved and cared for. Even right now it is eating you and everyone around you. It is standing in front of you. Can’t you see? If you do then you will definitely start trembling like Arjuna for you will at once realize there’s no point in winning this war. The real game is probably something else!

Arjuna’s state is not unique. It is you here! You find yourselves in so many intellect-crippling situations as you go through the journey of life. Remember? You wanted happiness in a relationship but experience misery. You desired to know everything under the sun but find yourself so ignorant. You craved for true love, but that has proved to be a mirage. All your degrees, education and titles fall apart and are of no use when a loved one departs. You may not sense it but everyone needs supreme knowledge to solve the complex puzzle called life. Gita shows Arjuna needed a Guru and he found one in Krishna. You too need a true Guru who is situated in experience and you too need to drop your ego and surrender in humility to learn from Him.

Yes! dropping your ego and surrender is must. Even Krishna will later in fourth chapter give this wisdom to Arjuna on how to receive the wisdom from your Guru. Krishna preaches “O Arjuna! You must learn the Truth by taking refuge in a spiritual Master. Inquire from him with reverence and also render your selfless service unto him.”

Sanjay said – Having spoken thus, Gudakesh (the conqueror of sleep), that chastiser of enemies, addressed Hrishikesh (master of mind and senses) “Govind (the giver of pleasure to the senses)! I shall not fight,” and became silent.

Here too is a lesson for the seekers. Even in your confusion there is some prominent option. It is important to identify that emotion or thought. Then clarify your position to your Guru and become silent. This silence is not verbal. You have to become silent in your mind. Arjuna may not have had the opportunity to calm his breath due to obvious reasons but you do. So to silence your mind when you are listening to your Guru, check your breath. Use breath control (pranayama), use Swara principles to your advantage. Keep your Guru towards your receiving side. It helps!

Master AD, as Acharya Agyaatdarshan Anand Nath is lovingly called by his disciples, friends is a true Tantra Master. You can either love him or hate him but for sure you can NOT ignore him. He and his beloved consort Ma Shakti Devpriya Anand Nath are engaged in spreading scientific spirituality in masses through their Tattva Shakti Vigyaan initiation camps. Master AD, a poornabhishikta in Srividya (Krama System) has equal command on Yoga, Pranayama, Tantra and Kriya Yoga techniques and guides seekers worldwide through 'The Shakti Multiversity' platform. The Shakti Multiversity residential facility (Ashram) has come up in the foothills of Himalayas near Dehradun. To attend residential courses you may contact at : shakti.multiversity@gmail.com
View all posts by Ach. Agyaatadarshan Anand Nath →
This entry was posted in Gita by Master AD and tagged discourses on gita by Acharya agyaatadarshan, Gita by Acharya Agyaatadarshan, how to use swara yoga while learning from a guru, in which shloka of gita arjuna accepts krishna as his guru, meaning of hrishikesh, Tantra Masters in India, what was the age of arjuna at the time of mahabharata, what was the age of krishna at the time of mahabharata. Bookmark the permalink.