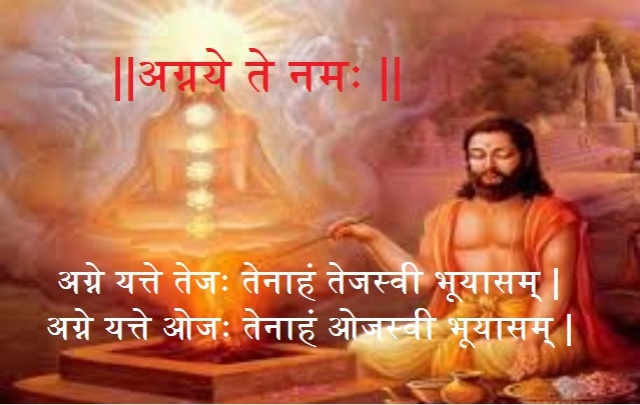 In the previous post of the subject I placed the last Shloka from Mahabharata for your contemplation.. We ended at –

Just as the fruit of reading scriptures is good and graceful conduct, the fruit of a woman (as wife) is rati (sexual pleasure and all the beauties of life) and santati (progeny), the fruit of money is charity and luxury; the same way the fruit of Vedic studies is Agnihotra (discipline of yajna).

It is said that all the materials, rasas, fragrant substances, Gems, Gold and Iron – everything has been created for Agnihotra (Yajnam). All the Shastras such as Dhrama, Nyaya, Ayurveda, Dhanurveda etc. are created for the Agnihotra. The 6 parts of Vedas (Vedaanga) – Chhanda (metre), Kalp (Method of Rituals), Shikshaa (Phonetics), vyaakaran (Grammar), Jyotish (Knowledge received from Cosmology), Nirukta (Meaning of words/Etymology/Dictionary) are all for Agnihotra. All the books contaning records of time, wisdom, Truth, and rituals like History, Upanishadas, Puranas, Karma (TantraShaastra) are created for the Agnihotra.

Further it is said –

To support the altar for fire ceremony (Yajna) and produce various materials for the Yajna Lord Brahmaa created this earth. The plant kingdom was created to produce samidhaa (material to be offered in fire) and Yupa. Cows are created for their use in dakshinaa (Remuneration given to the priest) and supplying various substances needed in the sacred fire-ritual. Gold and Silver has been created to be utilized in creating various utensils and pots used in Yajna. Kusha (Tadch grass, the Sacrificial grass or bot. Desmostachya bipinnata) has been created to be used in covering the ground around the Kunda (Sacrificial Fire Place) and to protect against Raakshasas (evil forces, demonic forces). The constellations of stars, the heavenly Gods & Goddesses and Braahmins have been created for participating in and conducting the Yajna.

It is said that those Dwijas (twice born) who meticulously follow the process of Agnihotra , their endeavours such as daanam (donation), homam (Fire Sacrifice for purity of self), Yajna (Fire sacrifice for the purpose of pleasing Gods, fulfillment of some purpose), Adhyaapan (teaching) are always successful.

The good karmas of Agnihotris (ones Performing Fire sacrifice) are accepted and kept intact by Sun god (who shines with thousands of rays).

Therefore Bhagwan (Lord) says; Those who wish to elevate themselves, must meticulously follow the Agnihotra daily.

The Agnihotra should be treated as atma (one’s own identity) and therefore one should never criticise or leave the practice even for a moment.

The importance, power and significance of Agnihotra is in helping the performer transcend this place and piercing through the solar gravitation such people reach their ultimate destination. This achievement is for those who perform and enjoy Agnihotra while keeping their senses under their control.

Master AD, as Acharya Agyaatdarshan Anand Nath is lovingly called by his disciples, friends is a true Tantra Master. You can either love him or hate him but for sure you can NOT ignore him. He and his beloved consort Ma Shakti Devpriya Anand Nath are engaged in spreading scientific spirituality in masses through their Tattva Shakti Vigyaan initiation camps. Master AD, a poornabhishikta in Srividya (Krama System) has equal command on Yoga, Pranayama, Tantra and Kriya Yoga techniques and guides seekers worldwide through 'The Shakti Multiversity' platform. The Shakti Multiversity residential facility (Ashram) has come up in the foothills of Himalayas near Dehradun. To attend residential courses you may contact at : shakti.multiversity@gmail.com
View all posts by Ach. Agyaatadarshan Anand Nath →
This entry was posted in Vedic Wisdom, Yajna - Secrets of Fire Ritual and tagged agni upanishad, agnihotra practice in mahabharat, agnyopanishad, अग्न्योपनिषद्, can i get enlightenment by doing yagya, can yajna give enlightenment, enlightenment through agnihotra, Guuma Shakti Devpriya Devi ji, how to perform agni sadhana, Master AD, Tattva Shakti Vigyaan, the shakti multiversity, who can perform agnihotra. Bookmark the permalink.