“How, in such critical odd moment comes upon you this despondency – a behaviour improper for an Arya, disgraceful and detrimental to the attainment of Swarga (heaven), Arjuna?”

Few things to understand – Lord Krishna has used two words which require special mention the first one is Anaarya (Unlike Arya) and second is ASwargya (Not leading to heaven). These words coming from Yogeshwara, Jagadguru Shri Krishna need to absorbed without using any prism of philosophy, faith, religious belief or mysticism here. As I said this commentary is being taken up by me fundamentally on the premise that all these words were spoken by Krishna & Arjuna (if not in real time then through telepathy). Therefore every word coming from Lord Krishna, the Master of Masters of Yoga, the God incarnate has to be accepted in its truer sense without giving it color of philosophy. At least for this commentary I am refraining from philosophising for the sake of simplifying the subject and make it less complicated for the ordinary, so called practical, scientific temperament-oriented, sense trusting intelligent modern man.

And for the sense-trusting men Swarga is ‘non-existent’ as neither Swarga or Heaven is direct experience of his senses nor it is written in modern books or even testified by scientists in the laboratories. So, this must be explained before we proceed because if you miss the real meaning of the first piece of advice coming from a Master in all probabilities you shall miss the whole Gita. If you are not able to understand, accept and internalize these words or if you outrightly reject the concepts being propounded by Master here then you can still read Gita merely for the sake of reading, memorizing and singing it’s verses to impress yourself and others however you have already missed the point.

Krishna had been listening to Arjuna’s lamenting and confusions so far patiently but is bit perturbed upon his decision..

Arjuna in the state of confusion and shock had said this before dropping his bow..

“.. even if sons of Dhritarashtra kill me (unarmed) It would be better.”

And listen to Krishna now.. He expresses his dismay in the first sentence (question) he speaks. “How, in such critical odd moment comes upon you this despondency – a behaviour improper for an Arya, disgraceful and detrimental to the attainment of Swarga (heaven), Arjuna?” It is clear that Krishna is surprised to see such a behaviour of Arjuna that’s why He first fires the question then adds Arjuna’s name at the end  of the question.

Though Krishna may have seemingly got surprised and blasted with a question but his expressions in such an spontaneous eruption are still impregnated with a higher vision and broader understanding of how a human life should be spent gracefully – Keeping one eye on the physical and another on the spiritual or Ethereal plane.

The first thing Krishna indicates to Arjuna belongs to material, worldly, physical and social realm – ( अनार्यजुष्टम )‘Unlike Arya’. This is the first word in this verse which needs explanation. Most people, even in India think Aryans as descendants of a race. Even people have misplaced understanding that Aryans were invaders who came from North. Some people are so blinded that they say the fair color of skin is not the characteristic of Indian race and only South Indian Dravidians are true Indians. For the clarity on the subject we must know that ‘Aryaavart’ is another ancient name of the original undivided India also known as Bharatvarsh (only later to be called Hindusthan {relating to river Sindhu or Indus} and its English version India). In fact Arya is a sanskrit word meaning ‘Noble, Worthy, Holy, Civilized’ and Aryaavart literally means ‘abode or home of the Aryans – the holy, noble, excellent ones. The Arya therefore is a collective qualitative adjective conferred upon the humans of this holy land rather than their racial or featural distinctions. The Aryan are supposed to be following an evolved truth-serving social and justice system rooted in spiritual values to save the positive human values on this earth from the ill-oriented ones.  Arya is the word which defines the willingness to adopt positive, rightful behaviour to help goodness prevail on this earth (matter) and peace in personal life (mental). The Aryan way of action is that creates an atmosphere of goodness, freedom and love – all the positive attributes coming to life on earth. Aryan way is to create goodness or Heaven on earth even if that comes at the cost of fighting a battle with ill-minded, unrighteous one’s. Arjuna seems to be forgetting this fundamental principle in his decision.

But human life in the view of a realized Master like Krishna is not limited to this material world. He is capable of seeing the continuity in the journey of individualized consciousness (atma) through various stopovers in Ethereal planes before re-entering this material realm again hence he is using another word (अस्वर्ग्यम) not leading to Heaven (meaning thereby a dissatisfied composure of soul in the ethereal realms beyond the material realm). Another meaning of sanskrit word swarga is ‘creation’. If we take this meaning the intention of usage of ‘aswargyam‘ would mean ‘something which does not create any opportunity’.. and this meaning shall be acceptable to most of logical minds I am sure. Human life is a continuous circulatory movement around three states of consciousness – waking, dreaming and sleeping. Apart from the waking state no other state deals with the worlds connected to outer sense organs.. but the experience of dream and sleep is a reality.  I do not see any reason.. whatsoever, to discount the experience of dreaming and sleeping because even dreams are ‘experiences’. And tantra says the perceived idea is as real and tangible as any physically manifested object therefore swarga as a state of experiencing between two lives (incarnations) has to be a reality. Matching it with the words of other spiritual masters we know that for a Yogi or Tantric practitioner this Heaven (swarga) may indicate to the unbound possibilities and even freedom (swatantrya) of divine consciousness. Such an experience and actions therein would be in non-matter or in the ethereal plane only BUT as real as this waking reality. 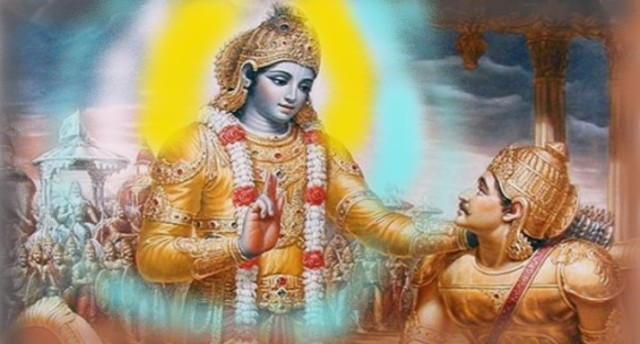 In particular, these two words  Arya (denoting behavioural attributes contributing to Kirti in material plane) and Swarga (denoting actions aimed at Kirti in the ethereal plane) of Krishna’s first sentence need to be understood, pondered upon and investigated personally by each one of you. As your empowerment (attainment of Kirti), evolution and enlightenment happens during your repeated travel between the matter and ether. Kirti (कीर्ति) is accumulated positive vibrations/energies as the outcome of any good (rightful duties) karma (actions performed).

As already stated the name of the Arjuna appears at the end of question showing that this question from Krishna in itself was more important than the person whom this was directed to. In place of Arjuna whole humanity can be placed. Only if you could become more aware you would see that…this is ‘The Question’ which your inner voice definitely asks at all those times when you take a decision in a hurry, or blinded by selfish motives or deluded by wrong interpretation of truths.

Being aware of this inner voice in all situations is what shall lead you to a divine balance in your choices.. such that your actions (or even inaction as in case of Arjuna’s decision to not fight the war) arising out of your decisions such taken shall serve you good in both the planes of existence. Only such action shall creates and adds to the amount of goodness (Kirti) in material experience (society) and otherwise (in your personal inner space).

“Why are you foolishly giving up?” asks Krishna to each one of us.

An initiate of Kaula Tantra tradition. The sole purpose of my beloved consort AD and me is to spread the pure divine knowledge to the masses through Tattva Shakti Vigyaan and try to make every life more beautiful and blissful.
View all posts by Shakti Devpriya →
This entry was posted in Gita by Master AD and tagged discourses on gita by Acharya agyaatadarshan, do not give up ever, Gita by Master AD, gita chapter 2, krishna teaches fighting spirit, logic versus life, the first question of Krishna to Arjuna, what is swarga, who is arya, why we should not give up. Bookmark the permalink.